Do Animals Have Souls? 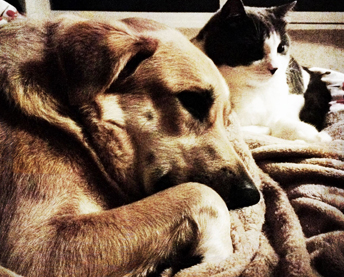 Do Animals Have Souls?

A common question I receive after someone loses a beloved furry friend is whether animals have souls. The loss can feel devasting, and is, in part, because of the soul connection shared between human and animal.

Some years back, a client called for her first session. The moment I heard her voice, I knew she was suffering profound grief. I hadn’t brought my spirit guides in at that point, but I ventured a guess. “Have you just lost a child?” I asked her. “No,” she sobbed, “My dog just died, but I feel like I’ve lost my baby.”

This is in no way meant to trivialize the death of a child, but rather to emphasize the huge emotional connection we humans make with our furry family members. Yes, animals have souls, and your soul and theirs have likely shared many lifetimes together, making the two of you soulmates.

Why Do Some Feel More Strongly Connected to Animals Than Others?

Because not everyone has the same ability to relate to animals, and it can be hard grieving the loss of a pet around people who don’t make such deep connections. They may act like you’re being over-sensitive or making a big deal about nothing.

The humans who have the strongest connection with animals are those with pronounced talents for intuition and empathy. These past-life abilities allow for a kind of telepathic communication.

The Past-Life Talent for Empathy.

My spirit guides describe the talent for Empathy as (amongst other things) the ability to pick up on non-verbal emotional signals. It’s often particularly strong in those who have worked in past lives with animals, children, or those who can’t easily express themselves verbally.

Fluffy and Rover are drawn to people with this talent because they feel understood by them. It’s a two-way street. We humans are attracted to the animals we’re meant to know in this lifetime.

When you go to the rescue center or the store to find a puppy for the kids, or when a friend’s cat has just had kittens and you agree to take one, the spirit guides are working on the other side to make sure you get the one you’re meant to.

Usually, the pet you end up with will be one you’ve known before – a soulmate or “old friend,” as my spirit guides would say.

How Your Soul Reconnects With Your Animal Soulmate(s).

While on the Astral Plane (in between lives), Fluffy’s soul sees you choosing a cat, maybe months before you actually do. It then says, “Okay that’s the one! I’ll come into the Physical Plane as Fluffy, and that way I’ll have the owners I want.” (Not that Fluffy sees you as her owner. Servant might be a more appropriate word.)

The next thing you know, Fluffy is back with the same humans she’s known from previous incarnations. And because the lives of cats and dogs are shorter than ours, she might have been with you earlier in this lifetime. It could be another opportunity for Fluffy to enjoy the sense of familiarity and safety that comes from being in your company again.

One you’re reunited, if you have a talent for Empathy and you pay attention, you can learn to hear Fluffy’s small still voice, which should make her very happy. And it’s not that hard once you get used to it.

Her repertoire is somewhat on the limited side. She’s unlikely to be asking what you thought of the latest blockbuster movie. She’s probably just telling you she likes the new catnip mouse you bought her, or maybe she’s just saying, “I love you.”

Cats and dogs have souls, they’re just not quite as advanced as ours.

We have Stage Three consciousness (currently undergoing the shift to Stage Four), while most other large mammals have a more instinct-based Stage Two soul. Which is not a bad thing. Though Fluffy will never learn to write beautiful poetry or create figurative art, she won’t screw the economy with credit default swaps either.

Soul-to-soul contact is a beautiful thing, whether it’s between two humans or you and your pet.

Cats and dogs (and other animals) teach us a great deal about compassion by creating invisible, soul-level bonds between their world and ours.

And though we may mourn their departure and feel gut-wrenching sadness when they pass over to the Astral Plane, few of us would ever wish we’d never had them in our lives.

If you’ve lost a beloved pet, I hope it brings you comfort to know that – when you’re ready – if you ask the spirit world to reunite you and your furry soulmate, the request will always be granted.