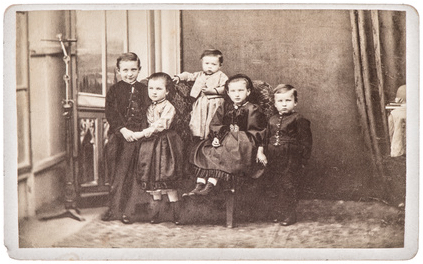 Recently, I told the stories of Miranda and her three children, and how their past lives were the subject of a couple of session recently. When it comes to children remembering past lives, they don’t necessarily do it consciously. More often, they reveal the memories through their quirks, anxieties, ailments, and fears.

I thought it would be useful to review their progress. As expected, simply knowing what happened in their past lives has been enough to trigger positive changes. It’s a question, always, of reminding the soul to put the symptoms back in the past where they belong.

The first of the three I looked at was Calvin, aged nine. He’d died on the battlefield during World War 1. During a session with Miranda, I’d told her how he got tangled up in barbed wire, before being shot multiple times.

I predicted that Calvin’s past life would reveal itself in specific ways. I expected him to have a fear of thunder and other loud noises as a resonance of the sound of battle, an aversion to tight clothing after being trapped in the barbed wire, and that he’d offer hugs on his terms only. That’s a reaction to the sense of abandonment his soul would have felt at the time of death.

One of the problems associated with children remembering past lives where they died alone is that the deep-seated fear causes them to push their parents away. It may seem quite irrational, but the soul is trying to confirm its belief that it is not loved. I also expected that Calvin would be afraid of the dark. Sure enough, he had all the above reminders of the past. But it’s been some time since his mother told him about this past life, and a lot has changed.

Miranda wrote to say, “I see a marked difference in his behavior around loud noises, without a doubt. When he was a baby, he was absolutely TERRIFIED of car washes, and once when he was about 8, we had a thunderstorm start to roll in here at home when we were out by our pond. He ran, absolutely stricken, screaming, and half naked through the forest and back to the house, leaving all of us in the dust picking up beach toys. He was truly in no danger. He was just absolutely panicked. Now, for the most part, he only seems to have fears around going to bed when he’s seen something in the movies that seems scary. He hasn’t asked me about murderers or being killed for a really long time!

“He wore jeans for cowboy day at school the other day, and guess what? Said not a thing about the waistband. He doesn’t wear jeans as a regular rule, but it used to be a real issue if he had to wear them. He is also about the snuggliest little boy you can imagine now. He’s in my lap constantly, and I do get lots of hugs and even an occasional smooch on the cheek.”

I expected that Miranda’s daughter, Rachel, would have had a major problem with separation anxiety when she was younger. I was certain, too, that she’d have a problem with sleep, breathing issues, and that she’d be terrified of losing her mom. All of this would stem from the past life I uncovered, in which she’d died of polio in a Soviet orphanage, after losing her parents in one of Stalin’s infamous purges.

She showed a lot of resonances from that traumatic past life. She hated to leave her mother’s side. (“My little Velcro,” was how her mom described her.) She couldn’t take a deep breath (a resonance from the polio), and the hours of darkness were a major cause of stress.

“Rachel has had a significant change,” Miranda told me. “I also am wondering if there is something in that lifetime in the orphanage that had to do with a religious faith, because we just moved her from the Catholic school, and she was SO RELIEVED. She tells me that she just didn’t feel safe there. It was like night and day.

“Prior to that, she was unable to go to bed without having to say goodnight over and over again, coming to find me several times. She would obsess over separating from me. Now she’s able to discuss her fear, and why she’s always putting the blanket over her head at night. The other thing I noticed that is HUGE is that instead of putting her fears and blame onto us, she suddenly seems able to deal with them without lashing out. For us as a family that is so big because her bad days were always our bad days!”

My Spirit Guides were clearly concerned about the sugar-induced inflammation they detected in Miranda’s daughter Anna’s body. I found the underlying cause was a past life in Barbados in which she’d been an overweight, diabetic, near-blind woman with a dependence on rum. That incarnation had left her soul with a heightened concern about her weight, and since she’d been a burden to her family back then, she doesn’t want to be any trouble to anyone.

When I first uncovered Anna’s past life, she had an extreme sensitivity to sugar, was ultra-cautious around food, and ate, as she put it, “like a wild gorilla.” And in the space of a few weeks, since she was reminded of this past life, a lot has shifted in that area.

Her mother said, “We haven’t tried any sugar, but suddenly she’s wishing she could have dessert. Prior to this, she was vehemently AGAINST any kind of dessert. Today she made a pumpkin pie with stevia and applesauce to sweeten it, and she’s positively giddy about eating it.

“Another thing I’ve noticed is she seems just the teeniest bit more demanding. This is NOT a demanding child, and I think this is a good thing. She’s been more outspoken about asking for things she actually needs, like winter boots and vitamins. She was always so timid before–as though it would bug me to ask for such things.”

I’ve said it before, and I’ll say it again, that I don’t think you can ever truly understand yourself without knowing what happened in your past lives. And the same applies to your children. Exploring children’s past lives doesn’t just explain so much, but it leads to profound and permanent shifts. Instead of dragging the fears, unexplained aliments, and other blocks with them for the next four-score and ten, they can leave them behind, better able than ever before to be everything they’re meant to be.

In just a few weeks, Miranda’s children have begun showing signs of healing. And it will continue as time goes on. Very often, the physical shifts you see with children remembering past lives are signs of deep spiritual and emotional transformation. And rather than representing the end of the story, these shifts represent the beginning.