Stephen Hawking: An Old Soul and a Life Well Lived 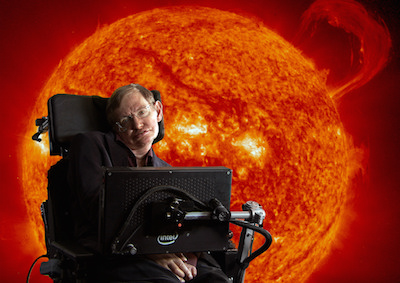 Farewell, Stephen Hawking. You were an especially inspiring old soul.

I’ve been asked quite a few questions about Stephen Hawking following his death. Did he choose to spend his life in a wheelchair? Was he an old soul? Did he achieve what he came here to do?

There’s no need to talk here about Hawking’s amazing mind, his scientific achievements, or his legacy. A quick search of Google will tell you everything you need to know.

What I want to do is examine his spiritual purpose. Who was he, and why was he here? Let’s find out.

So many of the world’s greatest inventions, insights, and innovations have sprung from the minds of Level 7 souls. But Hawking was much older.

At Level 10, he was on the last cycle of lives as an old soul. More specifically, he was 70% of the way into Level 10, and that percentage is analogous to Level 7.

A Level 10 soul at 70% is about creativity and innovation. And what surprised me most about Stephen Hawking was his soul type. He was a Creator type, with a strong Thinker influence.

The soul of a scientist who chooses to be a Creator in this life, does so to help tap into the other side for divine inspiration. They don’t know it, but much of their insight is the result of channeling.

Not surprisingly, Einstein was built this way. As was Andrew Wiles the mathematician who discovered the answer to Fermat’s last theorem, a problem that had baffled great minds for 300 years (I mention a bit about Andrew Wiles in my book, The Instruction).

This Thinker/Creator combination allows even the most rational people to make leaps of imagination.

Having a Thinker influence made Hawking more cerebral than the next Creator.

Many Level 10 Thinker types are atheists. The most common reason is that they reject religion, and reject spirituality along with it.

Hawking is known for having stated that understanding the universe may be a glimpse into “the mind of God.”

Later, when asked to explain his position, he said, “What I meant by ‘we would know the mind of God’ is, we would know everything that God would know, if there were a God, which there isn’t. I’m an atheist.”

Stephen Hawking’s life was one well lived. And, interestingly, it was never part of his soul’s life plan to get sick, and spend most of his life confined to a wheelchair.

Despite his disability, he exceeded his soul’s expectations for this incarnation.

Hawking fulfilled his soul’s desire for immortality by creating a lasting legacy, while also raising the collective consciousness through his work. Click To Tweet

Hawking said, “I regard the brain as a computer which will stop working when its components fail. There is no heaven or afterlife for broken down computers; that is a fairy story for people afraid of the dark.”

I expect he’s been pleasantly surprised, now that he’s on the other side.