Panic Attacks from Past Life Trauma 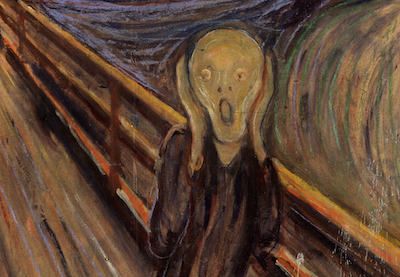 As someone who once suffered debilitating panic attacks myself, I have a lot of compassion for those who have to deal with them.

I’ve just returned from a weekend teaching retreat at Kripalu, a large retreat center in Massachusetts. The topic of the workshop was “Live the Life Your Soul Intended.”

As I’ve done before, I began the introductory evening session by telling my class about something that took place there several years ago—a story I’d like to also share with you.

A few years back, I was presenting a similar workshop to this year’s one.

I had just arrived at Kripalu, and with twenty minutes to go before meeting the attendees for the first time, I was alone in the classroom preparing my course material.

Out of the corner of my eye, I noticed a man in loose-fitting pajamas standing in the doorway.

I gave him a smile. As he walked silently towards me I saw that the nametag on his chest read “Kumar.” I said, “Nice to meet you Kum…”All of a sudden, he dropped to his knees in front of me and began wailing, “I feel I am dying! You must help me, I am dying…”

I didn’t know what to say. In a few minutes, forty people would be turning up, expecting my full attention.

I helped him to his feet assuring him (with less than total confidence) that if he simply followed the program over the next few days, he’d be as right as rain at the end of it.

“Are you in the US for long?” I asked, trying to lighten things up a bit. “No,” Kumar said, “I have come from New Delhi for the weekend. I want you to heal me!”

He told me how he hadn’t eaten for three days, and that he’d had ten panic attacks during the previous night.

I was torn. I really wanted to help the poor fellow. But I also felt a responsibility to my other students. And as they began trickling into the room, I urged Kumar to take a seat, assuring him everything would be just fine. Unfortunately, it wasn’t. He sat through the next 90 minutes in obvious discomfort, occasionally clutching his head and letting out a moan.

Once the room emptied, Kumar resumed the kneeling position and continued begging me for help.

Since the course I was teaching involved healing traumatic past lives to deal with phobias and other blocks, I just repeated what I’d already told him.

We went through a similar ritual the next morning. After more tears, and more impassioned requests for me to “bless” him, I was starting to worry that he’d become a major disruption to the class.

Kumar sat right at the front, just feet from me. His face, and the occasional groan, revealed the anguish he was still going through. Every so often, he’d begin hyperventilating.

After he had another major panic attack, I accepted that his needs were a priority, and set about uncovering the cause of his misery.

I took some quiet time in my room and brought in my Spirit Guides. According to them it was all very simple. In a past life in 1930’s New York, Kumar was a boy whose father took him to a picket line. When mounted police attacked the striking workers, he was crushed under the weight of the crowd.

I sat Kumar down and told him what had happened to him.

As I reminded his soul of the events from long ago, he stared into the distance as if he was remembering something long forgotten. In the space of a minute, Kumar’s whole body seemed to relax. Quite calmly, he looked me in the eye and said, “I need to eat.” And off he went.

I saw Kumar again an hour later. He was smiling and full of energy. He told me couldn’t believe the change he felt inside. Once again, he fell to the floor in front of me, but this time he was simply overwhelmed with gratitude.

To ensure I’d have the opportunity to monitor his progress, I offered the class a prize—a session with me—for the person who had traveled furthest to be there. No one, of course, could beat New Delhi.

When I spoke to Kumar a month or two later, he told me how the panic attacks cleared up the moment I told him about the past life.

In fact, he’d felt so much better that he’d decided to visit a relative in Manhattan before returning to India. He had a minor panic attack on arriving in the bustling city, but it quickly subsided. Given that New York was the scene of the original trauma, it wasn’t surprising that his soul would feel some trepidation.

Panic attacks are often the result of events in your soul’s past in which you lost control of your body, often through such things as bleeding out, or as in Kumar’s case, being crushed to death.

Panic attacks can be distressing to experience. Outwardly you may seem fine, but deep inside you may feel ready to collapse. The fight or flight reaction associated with panic attacks comes from your soul. Faced with triggers (reminders of the past-life trauma), it wants to escape. And when panic hits, rational behavior and the ability to control your emotions go out the window.

All phobias are death-related fears stemming from past lives. Water, heights, darkness, and public speaking are amongst the most common ones I come across in my work. But the person who gets paralyzed when it comes to making decisions is simply manifesting the effects of a past life in which they made a decision that caused their death, or the death of others.

Phobias and the panic attacks associated with them heal quickly when the original cause is uncovered. The principle behind overcoming past life fears and phobias is to remind the soul that “that was then, and this is now.”

Simply hearing about the past life is often enough to initiate deep and permanent healing.

If you are suffering from physical or emotional issues that are preventing you from living the life your soul intended, consider booking a session with Ainslie and his Spirit Guides!