Past Life Fear of Betrayal 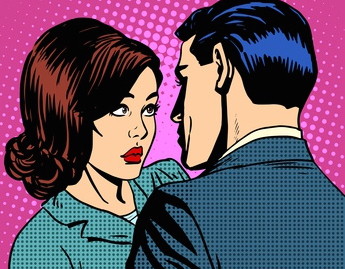 If you’re struggling with mistrust in your relationship, chances are good it’s because of a past life fear of betrayal!

Maybe you’re in a relationship. Maybe everything’s fine, and there’s no cause for worry, but you just can’t seem to trust your partner. You might feel they won’t be there when you need them, or that they’re up to something behind your back. You might worry about what they get up to when you’re not around.

Or maybe you’re in a relationship with someone who doesn’t trust you. They check up on you, interrogate you when you’re a few minutes late, blame you for not being supportive, or even accuse you of having an affair.

The underlying cause of mistrust in a relationship is a past life fear of betrayal.

Of course, if your partner has cheated on you in this life, your fear is perfectly rational. But absent any specific reason for mistrust, the cause is always a past life fear of betrayal.

One of my clients had a past life as a woman in Italy back in the early 1800s. Her husband cheated on her from the moment they were married, stole her money, and then dumped her. In this life, she’s married to a great guy who loves her dearly, and would never dream of having an affair. Yet she couldn’t help obsessing that he would. “One time, I accused him of having a thing for my cousin,” she said. “Even though they only met once when we got married, and she lives in another state. I think I’m paranoid!”

She wasn’t paranoid. She was simply suffering from a past life fear of betrayal that was triggered in this lifetime by her getting married. Her soul worried that history would repeat itself. All we needed to do to ease the fear was – with the help of my Spirit Guides – remind her soul that what happened in Italy was “then,” and this is “now;” and that the fear was no longer valid.

Like my client, a lot of people can become quite irrational when they fear betrayal in a relationship. In the past life, they might have faced a betrayal of expectations in a court of law, and ended up in prison. Or they could have suffered betrayal from their mother who abandoned them. The consequences in the past life might have been devastating. And, because the soul can’t separate this life from ones that have gone before (your soul doesn’t die between lives), it over-reacts to what it perceives as a threat. Irrational behavior is the result.

To ease a past life fear of betrayal, it’s important to separate the fear from reality. If your partner takes business trips where they never seem to get cell phone coverage, or really can’t account for their absence, or you find scraps of paper with mysterious phone numbers in their coat pocket upon return, you have every right to be suspicious.

But if they treat you respectfully, show up when expected, and have no track record of disloyalty, then you need to ask yourself if your mistrust is simply your fear of betrayal from a previous incarnation that’s keeping you on high alert.

If you’re with someone who mistrusts you when you’ve done nothing, it can get pretty tiring having to put up with multiple calls when you’re late coming home, or when you have to walk on eggshells to avoid triggering their accusations. If their previous partner in this lifetime cheated on them, then you might find yourself coming under suspicion for little or no reason.

The way people over-react when they suspect disloyalty is a sign of how traumatic the events of the past can be. Betrayal is a huge fear for many souls. When I see it in a client, I’ll often ask, “If someone is disloyal, is it three strikes you’re out?” And that’s when they’ll say, “No way, one strike is enough!” Their soul doesn’t want to take any risks, and believes that if it happened once, it’ll again.

To ease the friction in a relationship where mistrust is present, it helps to be open with your fears. Discuss your concerns – whether you’re the one with the fear, or the one dealing with your partner’s fear. Mistrust thrives on secrecy, so transparency is the quickest way to stop mistrust from interfering with the harmony of your relationship.

If your partner is the one struggling with a past life fear of betrayal, have patience with them, and gently help their soul come to the understanding that the past is the past, and is no longer relevant in this lifetime.

And if you’re the one with the fear of betrayal, a psychic-guidance session with me could be just what you need to help your soul let go of the past and allow you to live more fully in the present.