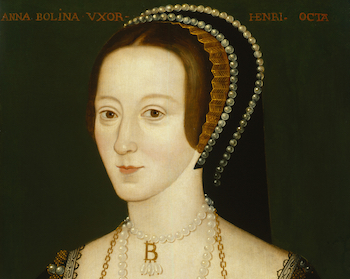 When a client asks if he or she had any famous past lives, I’m usually obliged to tell them no. Most past lives don’t make it into the history books—even if the person was remarkable or well known at the time. And sometimes the client who thinks she went down with the Titanic is recalling a similar experience somewhere else.

But when Kate asked me about one particular past life, the Spirit Guides were quick to validate everything she already knew. (Even as I was bracing myself to remind her that famous past lives are few and far between.)

It began a few months back when a friend of Kate’s invited her to one of my past-life regression classes. When the lines opened up after the regression, she told me what she experienced.

“I saw myself over the River Thames in London, watching men thatch roofs,” she said. “I was aware that I was a woman, and my little daughter was being taken away from me. I knew I’d never see her again, and felt devastated, crushed. She was everything to me. The moment of my death was not shown to me, but I was aware that it was soon after they took my daughter. I didn’t care if I lived after that. As Ainslie instructed, I asked my Spirit Guides if they had a message for me. Instantaneously my mind was suffused with joy along with their message “Your daughter loves you!”

A few months later, Kate had a session with me. Thirty minutes into the call, she couldn’t contain herself. “I have to know something,” she said. “Pleases give your Spirit Guides this one name—Anne Boleyn.”

Here’s how Kate described that moment. “He was silent for a few seconds, and then I heard him quietly confirm the name with them. A few more seconds passed and I heard him softly say “Yes?” And then “Yes.” His Spirit Guides confirmed what, until that moment, I wouldn’t allow myself to believe. Five hundred years ago I was Anne Boleyn. The sobs and tears came in a flood that I couldn’t contain–like a dam breaking, the memories poured out.”

A quick reminder here: Anne Boleyn was the second of King Henry VIII’s six wives. In 1536, after failing to provide him with a male heir, she was beheaded in the Tower of London on a variety of trumped-up charges. She left behind a daughter, Elizabeth, who would eventually become Queen of England. This was the little girl who was taken from her.

For Kate, having this past life validated has been transformational. “My conversation with Ainslie and his Spirit Guides has been life changing,” she wrote later. “I feel so much lighter…more confident…more at peace. It’s as if the “splinter in my mind” was finally removed and there’s no more doubt, and so much less worry about everything. Even the pain in my neck and shoulder has decreased! (That may qualify for being “miraculous!”)”

Kate has decided to write a book about Anne Boleyn, one that will take a uniquely first-hand perspective on her life and death.

“I know that I have been carrying around the fears from this life as Anne Boleyn for a very long time. Now that I know the truth, those fears can be put to rest.  As I work on the book, I find myself starting to block up with the fear of rejection and of inferiority. But because of Ainslie and his Spirit Guides, I can recognize what’s blocking my thinking, reclaim my freedom from them, and just keep writing. Actually the book is writing itself! I am just channeling Anne. It is very difficult for me to refer to Anne in the third person. I find myself constantly telling the story in the first person! It just happens effortlessly.”

Famous past lives may not turn up very often, but when they do, being able to relate present-day issues to documented facts can be illuminating.

For Kate, her destiny is tied to her past life as Anne. By writing her account of what happened, she will heal herself, and give valuable insights into the mind of one of history’s more intriguing characters (not to mention that of her ruthless husband, Henry).

Click here to learn more about how you can schedule a psychic guidance session with Ainslie and his Spirit Guides to help reveal your past lives.

While you may not uncover any famous past lives in your history, Ainslie can identify the traumatic events from previous incarnations that are holding you back in this lifetime from living the life your soul intended!