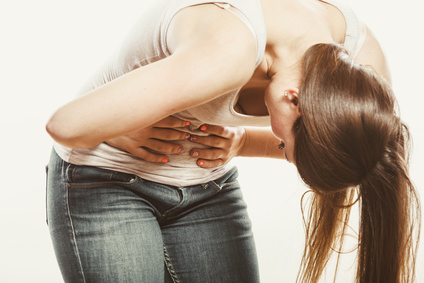 When my client, Adele asked me about her 14-year old daughter Laura’s crippling period pains, I was delighted to find it was a past-life issue (because that makes it easy to deal with).

With a strong Performer influence in her personality, I knew Laura would be unlikely to suffer in silence.

“Does she let the world know how she’s feeling?” I asked.

“Laura started menstruating when she was twelve,” Adele began. “And she would complain in an over the top way about cramps and discomfort.

“I thought it was just her inner curmudgeon making a big deal of things.

“She would also complain about being a girl, and how she’d rather be a boy because they don’t have to deal with menstruation.

“What made me sit up and take notice was when we were visiting at a family friend’s house when Laura was 13. She’s a martial artist and has the mentality of a ‘good soldier.’

“But while we were at our friend’s house, it was the first day of her period and she couldn’t keep it together.

“Laura was clutching her stomach and keeling over on the sofa. Her voice was faint and she was overcome with self-pity, but my intuition said there was nothing physically wrong with her.

We took her to a bedroom where she could lay in the dark while the rest of us ate and visited.

“I remember thinking, ‘She’s acting like she’s on her deathbed.’”

In a way, Laura was on her deathbed. As it turns out, the pain and bleeding acted as a trigger, a reminder of her traumatic death in 1800’s Scotland.

Instead of calmly dealing with the onset of her period, her soul was thrown into crisis mode, fearing (irrationally) that death was imminent.

I see these kinds of things all the time with my clients.

That’s because your soul doesn’t die between lives.

You might have first incarnated around 3,000 BC, and had 100 or more lifetimes since then. But your soul is still on life number one. For that reason, it often overreacts to perceived threats.

In Laura’s case, her soul was associating the symptoms of menses with premature death.

“She lay in a catatonic state for hours at our friend’s house,” Adele continued. “That misery during her period continued for months, and it was often hard for her to go to school on the first few days of her period.

“Catatonia interspersed with rants was her go-to coping method.”

To heal Laura’s problem, we went back to her previous incarnation, which just happened to be in my hometown of Aberdeen Scotland.

In that life, she’d died from loss of blood after hemorrhaging during childbirth. As her soul left her physical body behind, her sense of disappointment was acute. She felt, particularly, that the doctors could have done more to save her life.

Healing past-life problems begins when the soul is reminded that whatever happened in the past is not going to occur again.

I asked Adele to tell Laura about the events surrounding her death.

And I pointed out that, even if she didn’t seem particularly interested, the important thing was to get through to her soul.

“I had a long talk with her about the life in Aberdeen, and the causes of that death. I told her everything, including how you said she blamed the doctors, and felt that they could have prevented her death if they’d done better. She took it all in.

“Her next period was so different. She wasn’t suffering as she usually did, and you can be sure I was watching her very closely.

“It’s been several months, and she now handles her period like a matter of course.

“She still has cramps, but home remedies work well for her. I had come to dread her period every month for the disruption, and the Shakespearean rants on the unfairness of life and the misery of womanhood.

“And I’m so grateful that she no longer complains all the time about being a girl.”

On the subject of her period pains, Laura described how she used to feel before the healing took place.

“I was cold,” she said. “Tense—roaring with pain—groggy—like losing a waterfall of blood. My back hurt. My tummy was rock hard. I was cold, always so cold—and so tired I could sleep all day.”

I asked Adele if Laura showed any other resonances from that life in Scotland.

“Oh, yes,” she said, “Over the years, she’s made quite a few comments that seem to show her inner Scot.

“She went to England with a performance troupe when she was ten and, reminiscing about it, she said: “I don’t know why, but every time I hear someone speak in an English accent, I just want to punch them in the face to make them shut up!’”

We healed Laura’s period pains easily. Her Anglophobia may take a little longer 🙂