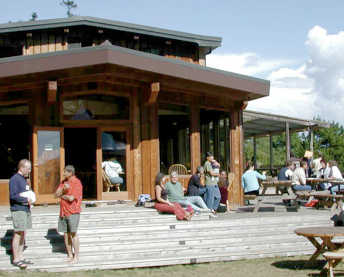 I’m gearing up for my annual 5-day retreat at Hollyhock in Canada, and I’d like to share a story with you from last year’s event. I told one of the participants that she’d had a past life in New York City in the earlier part of the 20th Century. In this life she’s a businesswoman, a hunter type with an edge that won her the nickname “Krusty” from the group. In her N.Y. life she was a young boy, living in an apartment with his parents. One day, the phone rang and the boy picked it up. A voice on the other end said, “Your dad just died. Can I speak to your mother?” The mother took the phone from her shocked son and got the same terse, matter-of-fact message: “You husband just died.” The call was from a colleague of her husband, someone woefully lacking in sensitivity. At the start of WW2 the boy signed up for active service and died soon after on a Pacific island, his legs cut off at the knees by machine gun fire. When I told Denise what happened, she lost her hunter-like composure. “I’m terrified of the phone,” she said, as a tear ran down her cheek. “I can’t answer it or even make a call.” I asked her about her knees. We all hold weaknesses in our bodies. Achilles body parts I call them. But hunters have the hardest time. For them, it’s hard to move stuck energy through the body. No surprise that Denise suffered from chronic knee problems. “Who was my mother in that life?” she asked. I looked across the room to where her daughter Maria was sitting. “You were the mother,” I said. Maria was starting to tear up, too. “I have the same fear,” she whispered. Both mother and daughter suffer from a past-life fear of the unknown. Every time the phone rings or they have to make a call, their soul goes into a state of alarm. The fear is technically what the spirit world would describe as a phobia, a death-related fear. The reason both souls react so strongly is that had the father lived, the son would have become an actor, not a soldier, and would more than likely have survived the war. The mother would have seen her son live a happy and fulfilling life. Instead she lost her only child while he was still in his teens. The death of the father was the catalyst that led to the son being taken off his life plan and his untimely death. The phone is the trigger that reminds both souls of the events that happened a lifetime ago. The fear of the unknown can make it hard for someone going into a roomful of strangers, or a visiting a new city. Most people with the fear agree that it would make them a lot more comfortable walking into a new situation if they could check it out beforehand. For obvious reasons, the first day of college can be anxiety provoking for many. When my daughter was little, I’d hold her in my arms outside a party while she peered over my shoulder, watching everything through the window until she felt comfortable. It might take twenty minutes, but once she knew who was there and there’d be no surprises, she’d say, “I’m ready now, Daddy,” and in we’d go. With my trip to Hollyhock coming up, I decided to call Denise and get an update. “My phone fear has completely subsided,” she said. “I can talk for an hour or more with friends and family without sweat running down my back. I can call a client now where before I’d have had someone else do it or avoided it until the problem went away. “My phone fear was like PTSD. The fight or flight mechanism would make my heart race, my body sweat, and I’d hyperventilate. I’d have to run to the bathroom, too.” Not only has Denise’s phone fear gone, but her relationship with her daughter has undergone a huge shift, too. “When she was born, I did not like her,” Denise said. “She screamed for ten months and we butted heads until she turned 15. We worked on forgiveness at the workshop and now, knowing she was my mother, our relationship has taken on a new meaning.” And her knees? “They didn’t get better instantly,” Denise said, “But now I hike, ski, and backpack without tensors or supports, and feel comfortable going downhill. Before, I was always braced for disaster, like my knees would be ‘cut out from under me.’ I no longer need painkillers. Tomorrow I’m going on a 16km hike with 3,000 feet of elevation change each way, so things must be grand!” It was one year ago that the healing began. All it really took was for me to remind her soul that “that was then and this is now.” Recognizing that the trauma she experienced was from a previous incarnation, her soul could simply let go of the fears and blocks and put the past where it belongs. An hour after telling Denise about her past life, she had a bizarre experience in the gift shop at Hollyhock. As she was handing over her credit card, she turned to get her daughter’s attention. Without thinking, she said, “Mom…”